How can we help you today?

Data retention in the ATS Print

Data retention in the ATS

Applicants always have the power to remove their data at any time. If however they leave their data in place for extended periods, the data retention policy configured by you will be applied and their data will eventually be removed.

To edit your organisations data retention policies you must be have the "Company Admin" or "Account Admin" security role. If you are in either of these roles, select "My Account" and then navigate to the "Edit Preferences".

If you are a member of either security role mentioned earlier, you can see the current Data Protection policy retention options available to you as shown in the screenshot below. 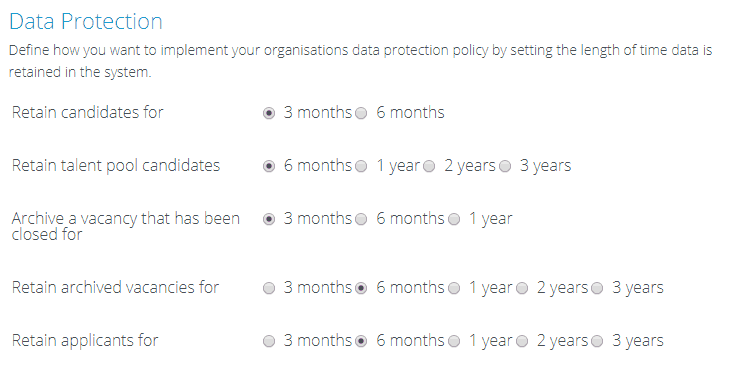 In all circumstances where necessary, an anonymised version of an application will be retained for reporting purposes until the data retention policies finally remove all the data involved.

Candidates are not Applicants and are not linked to a vacancy in the same way as an Applicant. Instead, they can be removed, or invited to apply. If Candidates are removed, they are not removed from the Talent pool, instead, only the link as a "Candidate" the the new vacancy is removed.

If someone applies who was a "Candidate" then they are linked to the vacancy as an Applicant. Their candidate record is updated with the notion of the application for reporting purposes.

Candidates are typically only useful for a short period of time before their data is stale. As such, retaining candidate records is limited to a choice of three to six months. Candidate records that are marked as "Invited" or as "Applied" are retained regardless of the limit for reporting purposes.

Applicant data is retained based on a cumulative approach to data retention based on a few key points in the time-line of a vacancy and application.

Archived vacancies can then be retained for a period of three months to three years after they've been archived for reporting purposes.

Applicants are then retained for a further period of three months to three years after the archived vacancies have been removed.

All of these limits are "upper limits" for data retention. At any time a recruiter can close or archive a vacancy early, after which the data retention policy for the following part of the overall policy applies. In addition, applicants can remove themselves from the talent pool or from the system entirely.

Tracking applicants even after they've removed their data

If an applicant re-applies to a vacancy, the same critical data they provide is used to generate a copy of their fingerprint and it is compared against all the fingerprints stored against the vacancy. If the fingerprint matches an existing one, then the application is identified as a duplicate.

Did you find it helpful? Yes No

Send feedback
Sorry we couldn't be helpful. Help us improve this article with your feedback.